Sometimes I still agree with Nick... 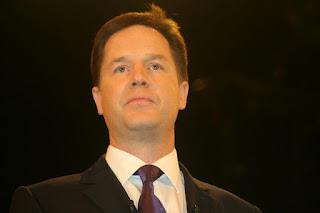 I’ve not been over-enamoured with Nick Clegg’s performances in recent months. There are times when he hits his targets; at others he’s painfully infuriating.

He makes excruciating viewing whenever he’s discussing his pet project of social mobility as he simply doesn’t convince on any level and, however heartfelt and sensible his rhetoric, he chooses to express it in language and terminology that will never, ever resonate with the public. Again, when it comes to Scottish issues, I feel embarrassed whenever he unwisely chooses to intervene.

Then again, he’s played some cards pretty well – not least on marriage equality. He’s been nothing if not consistent on the matter and has demonstrated his leadership qualities from the front. Last week, when he openly criticised the offer of a free vote for Conservative MPs on marriage equality, I found myself in agreement with him for a number of reasons. I also found myself empathising with him on account of the largely unfriendly response he received from sections of the media.

Sir George Young, the Leader of the Commons, has allowed the free vote on the basis that equal marriage is a “matter of conscience”. He is wrong, and Clegg right, on two levels. Firstly – and this is an absolutely key point – is the matter of coalition collective responsibility. Both partners have obligations to adhere to the commitments laid out within the coalition agreement, and a pledge to legislate for marriage equality was something contained within it – a promise, spelled out in black and white, that the government must deliver. It has been painful watching Liberal Democrat MPs supporting legislation they otherwise wouldn’t for the sake of coalition unity; it is even more galling to see Tory MPs squirm free of the same obligations by citing “conscience” grounds. At least the agreement contained within it the stipulation that Liberal Democrat MPs could abstain in the vote on tuition fees (although 21 voted against); there was no such stipulation attached to marriage equality. Either Conservatives support the coalition agreement or they don’t, but making a “matter of conscience” out of policy direction previously agreed to is quite disingenuous.

Personally I’m not a supporter of excessive whipping and I have no fear whatsoever that in the House of Commons the voice of reason will undoubtedly win out. But Conservatives cannot have it both ways: they cannot express outrage whenever Liberal Democrats voice criticism or opposition and then themselves fail to adhere to the standards of conformity they would impose on others. With the support of Liberal Democrats,  most Labour MPs and a reasonable number of Conservatives I imagine that the proposals should encounter few problems (the SNP, while supportive on principle, are likely to abstain as the Scottish Parliament is currently considering proposals for marriage equality thus making this essentially an England-only issue). I suspect the support of the Democratic Unionist Party will be neither forthcoming nor required and so in a sense this debate is academic. Of course, passage through the House of Lords will be more difficult – something that Nick Clegg and the Prime Minister are more than aware of.

Clegg is also right to oppose the free vote, because marriage equality is not a “matter of conscience”. We are not having some insignificant discussion about religious ethics, but debate about social justice, civil equality and human rights. It’s an issue that affects real people and at its heart is an inequality that must either be justified or rectified. I’m happy for people to take a different view to mine, but MPs voting against legislation must at least do so having fully considered the human rights dimensions and the ramifications for social justice posed by denying legal equality. Hiding behind “conscience” rather than face up to these tough issues is cowardly and dishonest. Let’s have a real debate and in doing so ask why it is right that the law as it stands discriminates against people on the basis of something they cannot change. If MPs for whatever reason do not accept the need for equality or removing discriminatory barriers then I accept their right to those views, but they should have the courage to argue in defence of inequality and discrimination rather than dismissing questions of human rights as trivial issues of conscience.

One such MP is Conservative Tim Loughton (with who I once spent an hour discussing mental health improvement). In defending his own position he refers to his personal experience of marriage before stating “it is difficult for me to accept that the solemnity of marriage as a religious institution can be anything other than between a man and a woman, and particularly where all the rights and responsibilities of marriage are now available to non-heterosexual couples through civil partnerships. I do not see why we need to change the law...[especially] at this time when there are so many other important matters for the Government to be addressing.” What else the government should do Mr Loughton doesn’t say, but at least he put forward an argument – even if he doesn’t seem to realise that the proposals deal with civil marriage which cannot, by anyone’s definition, be regarded as a “religious institution”.

I took to twitter on Monday to express my own views: “Equal marriage isn't a "matter of conscience". It's a question of dignity, human rights and social equality.” Rather interestingly a Lib Dem took great exception to this - a Lib Dem who had recently been a candidate for local elections in my area. “ln a democracy we are entitled to our own opinion, or is that not liberal? Leave marriage as it is” came the reply. I don’t care for my liberalism being challenged, but I object even more to the intellectual doublethink that entitling everyone to an opinion somehow equates with an instruction not to propose alternatives to the status quo.  I didn’t recall denying anyone the right to their own views but simply maintained that any issue of equality must by its nature be wider than a conscience matter. MPs have an obligation to consider personal freedoms and the wider issues and, as far as the Conservatives are concerned, must also consider their obligations under the coalition agreement.

The objector was unconvinced: “so are MPs not entitled to freedom of thought what are you afraid of is it that they may vote as their electors think.” Hmmm. This is coming from someone who actively supports a socially divisive Souteresque referendum on the issue and who would therefore remove MPs’ right not only to think but to vote. However, it was an interesting contribution because he was echoing what was being said by the euphemistically named Coalition for Marriage (C4M), who had commissioned their own opinion poll and conveniently arrived with “findings” that suited their standpoint. C4M have insisted that the public are not supportive, that marriage equality is not a priority for voters and that the government should drop its push towards equality “before it causes yet more social divisions and ill-feeling”.

I would suspect that David Cameron, Nick Clegg and Lynne Featherstone have caused fewer social divisions than the likes of C4M and Brian Souter. Other opinion polls tell a different story to that being propagated by C4M and we should not take their observations too seriously. However, they do make some points in respect to public attitudes which must be directly challenged. It may be true that marriage equality is not a priority for the majority, but it is a higher priority than the preservation of legal discrimination. It also may be true that it directly affects a minority, but we are all affected when inequality is institutionalised or when human rights are denied. It is also true that while voters’ concerns are chiefly with employment, the economy and education, that shouldn’t be a barrier to governments pursuing a policy direction on other issues broadly in line with public opinion – opinion which in this country generally doesn’t see why sexual orientation should be an impediment to human rights, or why such a controversy has been made unnecessarily on the matter.

And that is why Nick Clegg’s at times forceful leadership on marriage equality has been so valuable. He’s always been forthright and unequivocal in his support, but has also challenged the myths and misconceptions and has stressed reform as essential not only because it is liberal, but because concern for human rights demands it, because social justice demands it, because fairness demands it. When opposition has reared its head, whether in the form of Conservative MPs, Roman Catholic bishops or campaigns such as C4M, Clegg has refused to be distracted but instead has kept the main thing the main thing. He has been focused, resolute and unruffled by the hostility he has faced as a result. When marriage equality is finally enshrined in law, it will be due in no small measure to the Liberal Democrats’ determination – and to the contributions made by Lynne Featherstone and Nick Clegg.

For all Clegg’s indignation at the Conservatives’ free vote, this in itself presents a real opportunity for the Liberal Democrats. There can be little doubt that the sober voice of the Conservative Party will be drowned out by a minority, vociferously opposed to marriage equality, who will present themselves as the authentic voice of Conservatism. While the party fights among themselves it allows the Liberal Democrats the chance to demonstrate unity and take credit for achieving a key objective.

Clegg’s failure to provide the necessary leadership in respect to revitalising the party or other key policy matters is all the more lamentable given the effectiveness in which he has led on marriage equality, winning the argument while simultaneously facilitating the Tories’ internal conflict. I remain to be convinced that he has the right strategies or understanding to rebuild the party but, on the matter of marriage equality at least, I’m proud to say “I agree with Nick!”

An Duine Gruamach said…
Will it have the support of the SNP? I know at least one MP, Pete Wishart, has been openly supportive of gay marriage; but surely this is an "England only" issue since we have our own parliament doing the same thing in the moment. They'll therefore abstain as per custom, no?
6:17 pm, June 01, 2012

Andrew said…
Actually, that's correct and I didn't think of that (post amended now!)- I was thinking more of Pete Wishart's incredible support to date. Certainly, the SNP are hardly going to vote against the proposals though, leaving the Tory rebels isolated with a few backbench Labour MPs and the DUP (which was my main point).
6:50 pm, June 01, 2012