After my previous criticisms of Argyll and Bute Council's actions in banning a 9 year old taking photographs for a blog, Never Seconds - in which she was fully supported by her school - I am very pleased to see that the council has reversed its original decision and will allow Martha (a.k.a. VEG) to continue taking pictures of her school meals and writing accompanying reviews as of Monday.

That this about-turn is the result of intense public pressure and significant media interest is undeniably true.  The bottom line, however, is that the right decision has been made.  I trust that the public support Martha has received and the hundreds of e-mails of encouragement that were sent to her provide a more positive view of humanity than that of the cold, authoritarian voice of knee-jerk bureaucracy she experienced on Thursday and has given her a renewed appetite to share her talents.

(An apology from me - I regret having labelled the council "illiberal".  It is not the council that is illiberal, but its actions in this case.  In retrospect, the term "stupid" would have been equally fitting.)

I was particularly impressed that the charitable causes the blog hoped to raise £2,000 for (Mary's Meals, which provides food to some of world's poorest children) will be receiving a lot more than Martha ever believed possible.  On Thursday, in saying "goodbye", she wrote that "I don't think I will be able to finish raising enough money for a kitchen..."  Today, thanks to the generosity of people who perhaps wouldn't even have heard of Never Seconds or Mary's Meals before yesterday, Martha is able to announce that she has raised almost £46,000 for the cause.  Quite astonishing, and clearly evidence that clouds can have golden linings as well as silver.

I received a number of e-mails and tweets about the piece I wrote yesterday, almost all of which agreed with my interpretations of the council's illiberal and unnecessarily authoritarian actions.  I would, as a photographer and a liberal, like to say a little more because this has raised a few issues that affect wider social freedoms. 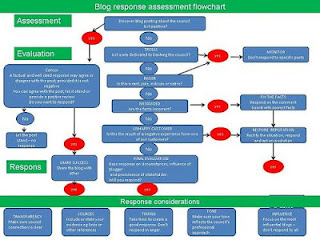 I don't actually know what Argyll and Bute Council's motivations were in suppressing the photography. Given some of the council's recent history, in which rather interesting revelations came to light demonstrating the council's institutional paranoia and obsession with monitoring dissenting voices (see flow chart), it seems more than possible that this is a simple case of responding to embarrassment.  Certainly newspaper interest in Martha's blog led to some less than flattering headlines, but neither Martha nor her photography are directly responsible for that.

It might also be the case that Argyll and Bute Council is simply the latest body to become concerned about photography in an age of instant sharing, where anyone can become an online broadcaster.  I'm perfectly familiar with concerns many people justifiably have about photographing children and it is absolutely right that schools and other public places should have specific rules and boundaries in place.  Recently I was taking photographs in a school and all my activities were rightly monitored, so I'm not suggesting any local authority should have anything but well-developed guidelines in the interests of protection issues.  I'd certainly have issues with Never Seconds if it included photographs of other people being taken without their consent (or even with it, given the scale of the blog's reach) or if this was a completely independent activity the school knew nothing about.

And no, of course we don't want every school pupil bring cameras into school and there are some very difficult areas of ethics and personal responsibility involved here.  Neither am I suggesting anyone should be free to take photographs wherever they want when there are clearly safeguarding issues at stake.  What I would say is that where schools are happy to facilitate use of photography as an educational activity or to further the talents of its pupils and when all such photography is appropriate and taken with the knowledge (if not supervision) of school staff there should be little concern of security or safety being breached.  So why the ban?

I used to work in a mental health in-patient unit.  Occasionally, I still do.  A few years ago, I asked about setting up a photography group on the unit for service users to learn new skills as part of the occupational therapy provision.  The OT and the ward manager were quite happy with the aim of my ideas, but had obvious concerns which were sounded out with other members of the multi-disciplinary team and management.  A decision was eventually made to purchase a camera and facilitate the group but there were fixed boundaries in place to ensure the maintenance of confidentiality and protect vulnerable adults.  I know that one of those service users went on to study photography at the local college; something we had clearly given him the confidence and interest to do.  And so, while it is important to consider ethical and legal implications (we certainly didn't want people using their phones or other photographic equipment to take pictures of fellow service users or staff) it's also imperative to consider the issue from the perspective of developing talent and creativity - something that should feature highly on a school's priorities.

This is highly relevant given that amateur photographers are finding more frequently their right to take photographs is being questioned, often on the spurious basis of security.  Let's take the case of the dad who took a photograph of his daughter at Braehead Shopping Centre: a legalistic over-reaction that brought nothing but ridicule for the centre and its security.  Should there be guidelines to protect the public?  Yes. - but we need to proceed with caution and in such a way as not to criminalise those who innocently take snaps without knowledge of "rules".  We could also consider the case of proposals to ban all photography on Glasgow underground, which include a £1,000 fine for a breach and are based on security issues and a "need to ensure that any such activity does not disrupt the operations of the network in any way."  As for the bogus security concerns; London underground has no such ban and quite simply the likes of al-Qaeda have won if we've all become so frightened of a terror threat that we can't take innocent photographs on the subway.  I'm all for evidence-based practice, so where is the evidence that people taking photographs on the subway have ever posed a security risk or prove an impediment to the smooth running of operations on the line?

I am more than aware of the complex ethical issues affecting photography and photographers in an ever-changing technological world. These ethical dilemmas should not, however, serve as a licence for an almost robotic authoritarianism. If Argyll and Bute Council has expressed its concerns to the Head Teacher of Martha's school who then arranged to speak to the girl and her family and made her own independent decision as to whether the content was appropriate (and, it should be noted, in respect to any precedents this may set) I would have had more respect for their position. As it was, the council behaved in an unnecessarily illiberal fashion.

I'd like to turn to the council's arguments for its defense, published yesterday. Firstly, the positives.  It was right that the council leader has issued a statement in which agreed to meet with Martha's family, has accepted there is "no place for censorship in this council" and admitted that any embarrassing or offensive contributions by journalists were not the fault of the girl.  Unfortunately, however, both this and the original statement fall short of an apology and reveals its true concerns: protecting the reputation of the caterers - nothing at all to do with the difficult ethical issues I referred to earlier.

Common sense should prevail as far as taking photographs is concerned.  On this occasion Argyll and Bute Council acted impulsively and in doing so created a PR disaster of epic proportions.  Hopefully the council will learn from its mistakes.  For now, I'd just like to extend my personal thanks to the council for not simply reversing its decision but for raising the public profile of Never Seconds - and when the by-products of stupidity include raising £46,000 to help starving children you have to think that all's well that ends well.
Labels: Argyll and Bute Council blogging Glasgow underground photography security

David Pollard said…
The Scottish Daily Record bullied and exploited a 9 year old girl for the sake of a cheap lying headline. A&B should have banned the girl for her own sake, should report the Record to the Leveson enquiry and take the editor to court for exploitation of a minor. Although not illegal, the papers actions were as bad a tapping Milly Dowler's phone.
11:45 am, June 17, 2012

Andrew said…
I agree that the papers are responsible for the embarrassing and unfair headlines and ultimately that their behaviour amounts to exploitation. I'm not sure that the girl's activities should have been banned but I believe the school had an obligation to be supervising them and perhaps there were grounds for temporarily suspending activity until the whole situation had blown over. All the same, the council acted disgracefully in the way they treated the girl - there were alternative courses of action available than bringing her into the head teacher's office and effectively ordering her to discontinue taking photographs.
11:48 am, June 17, 2012