COP26 - a failure and missed opportunity 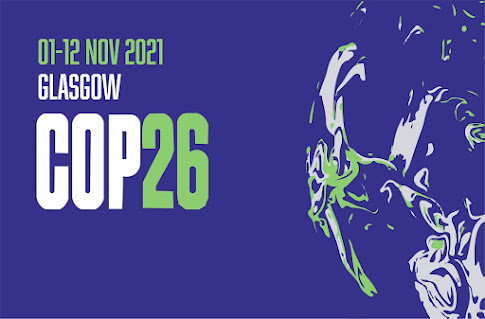 I wouldn't have said I had high hopes for the COP26 climate summit in Glasgow.

However, I was sufficiently optimistic to believe that world leaders would understand that time is running out, that COP26 represented an opportunity to put down some markers and that, at the very least, we should hear some bolder statements of intention.

Alok Sharma, chairing proceedings, today told delegates "You all know that the world is willing us on to be bold - to be ambitious." Urging those present to support the draft plan published yesterday, he added: "So much rests on the decisions we collectively take today,"

This really has been the problem with COP26: there is a complete disconnect between the urgency in statements like these and what is actually contained in the plan.

At the very least I'd have expected some commitment to phasing out the use of coal - but COP26 wasn't even able to do that, watering down its ambitions in the face of opposition from India and China. Smaller nations, many of them vulnerable and disproportionately likely to be effected by climate change, were not adequately listened to when expressing concerns about "loss and damage".

It was not surprising that India, China and South Africa would raise objections, but little thought seems to have been given in advance to addressing these and how to bring these countries on board. Similarly, it was not surprising that many nations would, quite justifiably, have wanted stronger provisions "for loss and damage". Again, this should have been foreseen and some better attempt to address these concerns made.

Equally unsurprisingly, once again the needs of so many nations have been sidelined in order to achieve something that can disingenuously be hailed as a success for the world's leading economies. Mohamed Adow, director of Power Shift Africa, said: “The needs of the world’s vulnerable people have been sacrificed on the altar of the rich world’s selfishness. The outcome here reflects a COP held in the rich world and the outcome contains the priorities of the rich world.” It is very difficult to disagree.The poorer countries that have done the least to create the climate emergency will also be those most devastated by its effects and we cannot afford to ignore this reality.

Adow was not entirely pessimistic and also talked of "leaving empty-handed but morally stronger". However, this wasn't a forum to establish moral strength but to make a decisive step forward in efforts to tackle climate change. In that respect, COP has been an abject failure.

The emetic self-congratulation of delegates after approving a plan that can perhaps best be described as lukewarm neatly encapsulates where we are in terms of addressing the climate emergency. Talk of "new co-operation" is all good and well but means nothing if not backed by action. The US and China agreeing to collaborate to limit the global temperature rise to 1.5C is valueless without any kind of solid commitment.

Of course there was positive talk on deforestation, methane emissions and the future of oil and gas use, but very little that hasn't been heard before. Many had hopes that COP26 would represent more than a talking shop and that overdue commitments would be made. Not necessarily anything groundbreaking or radical - most of us are aware that was highly unlikely - but some bolder statements of intention and some broad commitment to achieve targets in an agreed timescale seemed a feasible outcome..

The Glasgow Climate Pact does not, sadly, go far enough. Yes, there have been some welcome statements and there is, undeniably, a change in mood that it would be churlish not to recognise. The language of emergency is necessary and welcome. Whatever the concerns of India, China and South Africa, there is a broad international consensus that th age of coal needs to come to an end. There was some recognition of the disporportionate impact climate change is having on poorer nations, leading to a proposal to develop a trillion dollar a year fund from 2025. Undeniably there was a fair amount of positivity among delegates that they hope to be able to take forward to Cairo in 2022. But none of this is enough and we are running out of time - we cannot keep kicking the can further down the road in the hope that next COP will deliver something decisive.

In politics I'm often accepting that gradual approaches to change can be effective. However, this is not merely politics and what has come out of COP26 tonight is bitterly disappointing for those who felt it is time for some stronger statements backed up by reasonable actions.

UN Secretary-General António Guterres observed that "the path to progress is not always a straight line". He is, of course, correct, but I was not expecting a straight line - more a map with some unknown territory but at least agreement as to where we should end up and the roads we should be travelling down. I'm not really sure that's been achieved.

Prime Minister Boris Johnson, lacking Guterres's caution, hailed the outcome as "a big step forward". The tragic fact is that he almost certainly believes it. Labour Leader Keir Starmer demonstrated greater awareness of reality when he told reporters "we have seen too many promises for tomorrow, not the action that the climate emergency demands today...Glasgow has been a missed opportunity - a summit too often of climate delay not climate delivery".

Critically, what COP26 has been unable to do is to demonstrate how its agreed plan will be able to limit the global rise in temperature to 1.5 degrees. It also does little to address the power imbalance that continues to see the likes of India and China obstructing and undermining more ambitious progress.

Guterres tweeted "the climate battle is the fight of our lives and that fight must be won". Excuse the cynicism, but there was little indication that many of the key figures attending COP26 believed this and even less reason to think that we're any nearer to winning the battle. Those of us who hoped for real action on climate change this evening feel a great sense of helplessness, which is perhaps the greatest failure of a summit we believed would be able to at least provide a clear way forward.