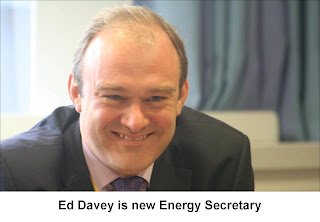 Energy secretary Chris Huhne has today resigned from the cabinet following the announcement that he has been charged with perverting the course of justice.

Huhne, who was once considered the natural leader of the Liberal Democrats and at one time favourite to succeed Nick Clegg, decided that in the circumstances it was best to stand down to "avoid distraction".

Huhne continues to maintain his innocence in the matter concerning his wife's alleged acceptance of his penalty points for speeding. That in itself, however, has become almost irrelevant. The allegation that a cabinet minister would willingly stoop to such deceptive practices has hung over him for several months and has predictably been repeated regularly in the media. Given the deep suspicions surrounding him, it's been a remarkable achievement on Huhne's part to have performed so well in difficult circumstances.

The announcement that the police were actually to press charges arguably made Huhne's resignation inevitable. He will now appear in court in two weeks' time. Nick Clegg praised his dedication, stating that he had done "an outstanding job". On this point, I don't disagree with Nick. As energy secretary Huhne's had a tough time trying to push a liberal agenda in direct opposition to the Conservatives who seem less interested in creating a sustainable future. In pursuing policies to achieve significant climate change targets he's ruffled a few Tory feathers and he's never been one to shirk a fight with his Conservative counterparts - something not lost on the Lib Dem grassroots.

Personally, I don't really regard the resignation as inevitable. The argument that he simply couldn't continue given the charges against him doesn't really stand up to scrutiny when considered in the context of several months' public suspicion of his actions. At least he'll now have the opportunity to clear his name. If he's innocent then, like former Glasgow provost Pat Lally, he should not resign on principle - especially given that he's been one of our most effective ministers in coalition. If, of course, he's guilty as charged then there really should be no way back for him - not because of the original offence but because of his attempts to conceal the truth.

It's a sad day for the party in so many ways. We've lost a capable, popular and effective minister over what is, when it's boiled down, a rather trivial matter. The promotion of Ed Davey (who I like and whose influence I predicted would become more visible this year) is, in the circumstances sensible. But not only are we replacing a thorn in the Tories' side with someone more likely to be amenable, the appointment sends a signal that the party is ruled by the "Orange Book" economic liberals, something picked up on by various fellow members on twitter. Personally, I have little time for those who use the phrase "orange booker" as a term of abuse or for the supposed divisions that some would like to reinforce - but I would like to see another socially liberal voice at the cabinet table. We can't be reliant on Ken Clarke.

Vince Cable is reported to have said: "I'm very sad...I'm sure he will clear his name and we would certainly like to see him back." I hope he's right. I have a great deal of respect for what Huhne has tried to achieve in a little over a year and a half. I hope he's innocent and, if that's the case, that at some point in the future he can return to government. What seems pretty certain is that any vague hopes he ever had of becoming party leader have all but evaporated.

It's sobering to think that a few penalty points for speeding could potentially finish a parliamentary career. All in all, a sad day for the Liberal Democrats.
Labels: Chris Huhne Ed Davey energy Liberal Democrats Nick Clegg Vince Cable

Anonymous said…
What finished his career was his apparant selfish nature, blatant lying over something petty and generally acting more like a crook than someone who can be trusted in government. Assuming this was true, how can anyone trust someone like that?

Don't think of it as a few points being the issue. That alone would have blown over in no time if not for the dishonesty issues or accusations floating up. It's the lying and selfish act that is the issue for most. Dishonesty and crimes related to it have always been considered very serious for anyone in power (even in the police or armed forces). Once someone starts down that path it's hard to know what you can trust.

I'd agree that the mere suspicion or hint of something shouldn't destroy the man and neither should he be pushed out if cleared. If/once cleared it will blow over eventually. If he is guilty then there's no coming back from that politically.

All we can hope for his sake is that there was a mistake and he did nothing wrong. It's amazing to think that something as small and petty like that could influence a party or its direction (by the replacement with another with different views and public performance). I'd hate to see this being used to push the Lib Dems even further into the shadow of the Tories in a time that the party needs to be distinguishing itself more than ever instead.
11:03 am, February 07, 2012

Andrew said…
Well, his career isn't as yet finished. If he's innocent there will surely be a way back for him.

We can not "assume" the accusations to be true. But I'm sure we'll find out in a few weeks. As I've said myself, if he's guilty then there is absolutely no place for him in government. As you rightly point out, the lies and dishonesty would undermine any political future he might have. I'd expect him to stand down as an MP at the next election too if that's the case.

But I don't think he should resign now. It's only a matter of a few weeks until we'll have a verdict. Surely he could have continued until then? He's managed well with the pressure of suspicion to date - so why not for a little longer?

Of course this is bigger than the penalty points but when it's all coiled down it's about how Chris responded to what was a trivial matter. True, if he's guilty and his career is ruined it will be because of his dishonesty and selfishness. But it will also be down to his stupidity in allowing such an ordinary matter to overtake him in this way.

There's no question that the party needs to be doing more to distinguish itself from our Conservative partners - and Chris more than any other minister was able to articulate a distinctive voice. Now we've lost that voice we face an additional challenge in retaining our seperate identity (as far as the public are concerned).

Let's hope he's innocent of the charges. I want to think the best of him. I want his obvious talent to be working in the heart of government to fight for liberal values. However, if he's lied then he'll deserve to be discredited, his political aspirations permanently ruined.
6:32 pm, February 07, 2012