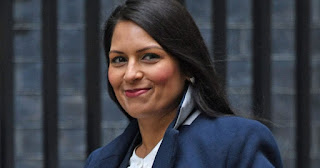 I'm not generally one to call for political resignations or sackings. Neither do I take much delight in them when they happen.

However, as a former civil servant who was personally involved in high-level discussions to eradicate workplace bullying, I have a strong view on the government's decision to express "full confidence" in Home Secretary Priti Patel following the Cabinet Office's inquiry into bullying instigated after the resignation of Sir Philip Putman.

That she should continue in office having been found to have breached the ministerial code is in itself unacceptable. Even more worrying is that Conservative MPs are not only defending her actions but using the report to make criticisms of the Civil Service.

Firstly, never before has anyone found to have breached the minusrterial code continued in office. Not one. Why should an exception be made for Ms Patel, especially given the unequivocal nature of the report's findings?

Secondly, when Ms Patel previously broke the ministerial code over her failure to declare meetings with Israeli officials in 2017, she apologised and was forced to resign as International Development Secretary. The breaches of the code committed here are surely more serious. Is the overnment  suggesting that bullying is of lesser concern than unofficial meetings taken suring a private holiday? Neither are acceptable, but surely "harassing, bullying [and] other inappropriate or discriminating behaviour" should instantly debar someone from one of the Great Offices of State?

Thirdly, her apology is not an apology. To glibly state "It has never been my intention to cause upset to anyone" fails to accept responsiblity for "uset" that she has caused. Intentionality is irrelevant; the bottom line is that her conduct in office has - to quote Sir Alex Allen, the report's author - "amounted to behaviour that can be described as bullying in terms of the impact felt by individuals. Such an excuse would not hold much weight in a court of law if someone was accused of, say, racism or homophobia; it's even less understandable coming from a Home Secretary who should be familiar with the fact that the standards expected of her are determined by the effects they have rather than what her intentions might be.

Fourthly, while the culture of bullying is not new, nor confined to Westninster, never before has there been such a scathing report into the performance of someone so senior in government. The government should be ashamed of these revelations, rather than defending the Home Secretary.

Fifthly, this will send out all the wrong signals to a Civil Service that, in the last few years, has sought to make progress on the issue of workplace bullying. There has been a very real need to deal with bullying and some welcome progress made, but those efforts are now undermined by the leniency shown to the Home Secretary. Also, when the Civil Service is developing ever more accountable models for dealing with bullying, why is it acceptable that the only person to consider the report into Ms Patel's behaviour is Boris Johnson?

Sixthly, it undermines the ministerial code: what purpose does it serve when any sanctions are imposed only at the discretion of the Prime Minister? Boris Johnson, in announcing "full confidence" in Ms Patel and his view that he is "reassured that relationships, practices and culture in the Home Office are much improved" (without citing any evidence for this), has rendered the code unfit for purpose. Not only do confirmed breaches no longer require ministers to resign, the substance of the report's findings - that there is systemic bullying within the Home Office - are essentially also dismissed. No actions are being taken at all after finding that should have far-reaching consequences - let that sink in for a moment.

When Sir Alex Allen feels that is has become necessary to "resign from my position as the prime minister's independent adviser on the code" because of the Prime Minister's lack of action, then it shows how toothless and irrelevant the ministerial code has become. The weakness of the code is that it trusted Prime Ministers to do the right thing and act consistently in relation to breaches. Mr Johnson's decision to back his Home Secretary in the face of such evidence for no reason other than she's a loyal Brexiteer is severly damaging to the only real mechanism we have to hold ministers to account.

Finally, the fact that neither Ms Patel, the Prime Minister, the government nor Conservative MPs understand why she should go shows that each of them are unfit for office.

Priti Patel must go. The ministerial code has existed since the 1940s and, as far as can be ascertained, anyone found to have breached its requirements has left office. What is so special about Priti Patel?

The Prime Minister's basic failure of leadership does not alter the fact that Ms Patel's actions in "creating a culture of fear" constitute unacceptable conduct from a Home Secretary. The defences from Conservative friends are as unconvincing as they are emetic. Unless Ms Patel leaves office, serious damage will have been caused to the Civil Service (and attempts to tackle systemic bullying within it), public confidence in the government and the ministerial code itself.