Support for Scottish independence at "highest ever" levels 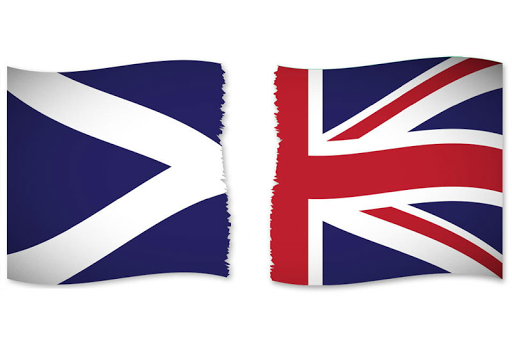 Support for Scottish independence is at its highest ever level, according to a new opinion poll released today.

The IPSOS-Mori poll projected that 58% of Scottish voters would vote to leave the Union in a future referendum, with 55% saying they would do so if there was a referendum tomorrow compared to 39% who would vote No.

The SNP and its supporters are naturally delighted. Unionists, on the other hand, are pointing to margins of error within the polling, the fact that it is simply "one poll", and so on. Some have gleefully explained that a different poll, from Survation and Progress Scotland, points to a mere 6% lead for independence. There is nothing particularly unusual about these kinds of discussions.

However, I happen to agree with Scottish Greens' co-leader Patrick Harvie when he says "it’s clearer than ever that the UK simply isn’t working for Scotland and that we must take our future into our own hands to build a better Scotland."

We can of course be dismissive of polls. However, I would think it is dangerous to ignore the wider trends they point to. What is quite obvious is that, irrespective of the vagaries of polling data, since early May we have seen a series of polls that show a lead for the "Yes" vote. We are also seeing that this lead is gradually increasing. "No" has not had a lead of more than 1% in any poll since early December 2019. Something has changed - and is changing. It would be foolish to deny it. 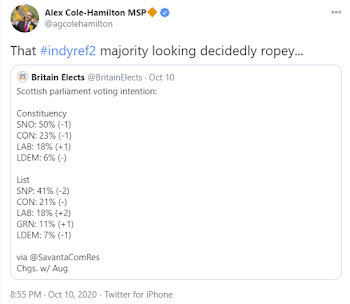 Even those who might be seen as denying this new reality seem to confirm it through their words and actions. There's something rather surreal about the sight of a senior Scottish Lib Dem taking apparent delight (left) from an opinion poll that shows the Lib Dems languishing in 5th place, with significant increases in support for the SNP and Greens from the 2016 election. And that's not simply because his key observation is flawed (the SNP won an absolute majority in 2011 with a smaller proportion of the vote) but because in this new reality it seems to matter not how well or badly we might do in next year's elections - only that there is no pro-independence majority. No doubt if the Lib Dems are reduced to one seat but the SNP and Greens combined only win 64 then it will have been a good night as far as Mr Cole-Hamilton is concerned. Yes's continuing lead in opinion polls has resulted in pro-Union politicians becoming what they love to accuse the SNP of: being obsessed with independence.

There are those who naturally ridicule this kind of tweet, but actually it needs to be understood. It is an expression of fear. There are many who are (I think understandably) afraid of what changing attitudes towards independence may mean for Scotland, and they will look for hope in the strangest of places (including polling that gives the SNP 50% of the constituency vote) to reinforce their faltering belief that - somehow - if we keep on doing what we're doing the nasty nationalists (and their cause) will simply disappear. It is, quite simply, unfortunately symptomatic of a refusal to accept this changing reality.

I use the word "unfortunate" because a willingness to accept that the momentum has clearly shifted will enable us to more meaningfully engage with political conversation. It's not to late to change the record, adopt a new strategy and project our own vision for a progressive, Liberal Scotland - and perhaps also to adopt an ambition to poll more than 6% nationally. There may well, even at this stage, be opportunities to sell a positive vision of a different Scotland to the public.

Those who have followed my blog for several years will know that I backed Yes in 2014, mainly because I saw independence as the most realistic alternative to the failing constitutional status quo. I didn't necessarily believe that Yes Scotland would win (only that they might) but what I was absolutely convinced of was that if Scotland voted No then it would have been by a much smaller margin than many expected and that, going forward, the momentum would be with the pro-independence movement. This was widely dismissed, especially by many within my own party who felt all we had to do was "defeat nationalism" in a one-off referendum and everyone would then start talking about Devo Max and federalism. It's fair to say that plan hasn't really worked out too well for us.

Harvie is right. The Union isn't working for a lot of us - and even those who defend it must accept that it is now widely perceived not to be working. The old arguments are no longer going to resonate. We need change. We need to create a better Scotland.

I'm not going to get carried away by this rather remarkable poll. There is nothing (yet) inevitable about independence, but there has been a significant and undeniable shift in public attitudes. The pro-UK rhetoric that worked reasonably well six years ago now appears to be tired and out of touch against the backdrop of EU withdrawal, a frighteningly inept and inhuman Conservative government in Westminster and the Covid-19 pandemic. The challenge for Liberal Democrats is to find ways to use the situation to do as Patrick Harvie suggests and give the public reason to associate us with realistic proposals for changing Scotland for the better.

That's not an easy task at all given our recent struggles, but it could be made a little easier by accepting, rather than denying, the changing political realities all recent polling has pointed towards - only then can we possibly begin to address it.

David Evans said…
What you are saying has a lot of sense to it. Of course there is lots of England that would willingly vote for Scottish independence. So long as they could be part of Scotland and so be rid of Bumbling Boris.

At a more serious level, I believe that the down side to independence is worse for Scotland (and for the rest of the UK) than anything other than the very short-term up side. If we could hold together for four years, I believe that the Tories will be more unpopular than they were under Thatcher in 1990 post poll tax, under John Major in 1997 or most of parliament was in 2009 after the expenses scandal.
7:19 pm, October 14, 2020

While I believe recent polling points to a shift in public perception and attitude, I wouldn't claim that such a shift is irreversible. I am not arguing that there are no potential down sides to independence either (all potential decisions on Scotland's constitutional future contain varying degrees of risk).

What I don't think we can do is simply wait in the hope that the conversation will eventually change. We have to respond to what the polling is showing us now and, if we don't like the idea of Scotland becoming independent, we need to be able to offer something of our own: an authentic alternative that can help create a better, fairer Scotland. More of the same old sub-Unionism isn't going to cut the mustard.

I am absolutely convinced you're right that in four years' time the Tories will be deeply unpopular (especially in Scotland). I don't see how that really helps in relation to the question of Scotland's future... unless you're suggesting all we need to do is wait for a Labour victory and suddenly we'll all be talking about federalism. I find such an outcome unlikely when Labour hasn't even yet whown that it understands federalism yet.

I also suspect that the Tories' deepening unpopularity may only serve to increase the strength of anti-Union sentiment in Scotland. We can't simply wait until the 2014 General Election to have these conversations.

nigel hunter said…
An authentative alternative is indeed needed to combat nationalism.The Scottish Libs should get its head together to device it and sell it for the next election both next year and 2024.Also a defeatist attitude or head in the sand behaviour should be countered by a plea to change the English voting system to make both Scotland and England be shown as ONE country.
11:09 am, October 15, 2020

Andrew said…
Nigel - I agree that an alternative proposal is needed, but not for the reason of combatting nationalism. If what we propose is seen simply as a belated offering to halt the momentum of the independence cause, then we will be seen - quite rightly - as being obstructive and disingenuous.

However, proposing a detailed plan that builds on decades of work - turning federalism from something more than a vague aspiration abd into something people might actually understand and vote for - is something worth doing for its own sake. Even if not ultimately successful, efforts to formulate an alternative that for many people would be better than either choice on offer could help rebuild the party into a credible force. Like your other suggestion for reform, there is absolutely no guarantee than Lib Dem pleas would be successful, but they would certainly represent a positive and distinctive position from which to fight elections.
1:42 pm, October 15, 2020