Why an MP "coming out" is good news

I joined the Lib Dems before the 2010 general election.

At that election there were a number of gay MPs returned - Stephen Williams, Stephen Gilbert and David Laws. There was of course also Simon Hughes, whose bisexuality was made public during his 2006 leadership campaign. There were various other high-profile party members who were LGBT, and at a time when same-sex marriage was being openly debated these voices were very much in the foreground.

I recall a few years later, when the focus was on LGBT+ issues in a way like never before, I objected to a particular political commentator suggesting the Lib Dems were the "gay party". He also pointed to the four MPs I mentioned above as part of his "evidence" before turning to his experience of the wider membership: "Why are all Lib Dem men gay?" he asked.

Here was my response:

Sure, it was an attempt at humour. But there was a serious point underpinning it: there's an awful lot of bi-invisibility (and pan-invisibility), even within the LGBT+ community.

Yesterday, Layla Moran used an interview in Pink News to reveal the fact she is pansexual and has been in a relationship with a woman for six months. Layla said: "it doesn't matter about the physical attributions of the person you fall in love with, it's about the person themselves". This is pretty much how I feel and I'm probably pansexual too but, having identified as bi for half a lifetime, changing the terminology I use to describe my orientation might confuse a few people - and, ultimately, I define myself by who I am in love with far more than I do my orientation. But I know (and I'm sure Layla does) that orientation is a significant part of an individual's identity; it does matter and we do have a responsibility to be publicly authentic, so it was helpful that she explained what pansexuality is in such a relaxed way. She wasn't there to win an argument, just to be herself.

As a result of Layla's interview there have been some online discussions about the nature of pansexuality and how it differs to bisexuality. That's not a bad thing at all, but it's not what I wish to focus on. Instead I've been thinking more about those who feel this isn't a story, or at least shouldn't be a story, as if somehow this is completely irrelevant.

When there has been a reported surge in LGBT+ related hate crimes in the last year, orientation can hardly be dismissed as "irrelevant". When there is so much invisibility of bisexual and pansexual people, coming out as such actually serves as a powerful statement. Layla Moran has done, in one short interview, far more than I have managed to do for bi/pan visibility in ten years.

Of course, there will be those who dislike discussion of LGBT+ matters, who hide their prejudices behind the "it's not news" mantra. But there are also people who genuinely believe we are at a stage when such things no longer matter, that we're free to love who we want and society no longer cares about "labels".

Firstly, I would say we can't be so complacent: the evidence confirms that while attitudes have significantly changed homo/bi/pan/trans-phobia remains a problem and there's still a great deal of progress to be made. Secondly, pansexuality is not a "label" - it's an authentically lived experience. I'm pleased Layla didn't simply state she was pansexual but talked about her relationship and brought that centre stage, which provided a human dimension "coming out" statements sometimes lack.

I think it's also fair to note that senior political figures can't keep their relationships hidden from the media for long, and it would be a bigger news story if people are "outed" by the press. In fact, it is likely that if Layla hadn't chosen to be open about this various media outlets would have been more than happy to "out" her on their terms. That is a disgraceful state of affairs, but an ongoing reality even in the supposedly enlightened 2020s. How much better is it for people to talk about their relationships so honestly and casually, and in a way which makes it easier for others to do the same?

Having people like Layla "coming out" will definitely help to "normalise" pansexuality and aid bi/pan visibility. It helps us understand that love is love. As Layla said: "we're in a really committed, loving, supportive relationship and I feel now is the time to talk about it because, as an MP, I spend a lot of time defending our community. I want people to know I am part of that community as well."  Believe me, this can really make a difference to our community and to how the public understand us.

If there are any doubts that bi and pan erasure is a problem, and one that is perpetuated by our media, take a look at the Daily Mail's headline. This kind of thing has to be challenged, as too the implied connection between lesbians and violence. (If you have the stomach, have a look at the comments beneath the piece and tell me there still isn't work to do...) 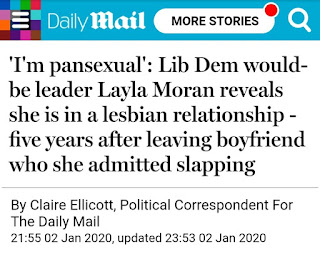 We can't dismiss this as somehow a non-story because we wish it to be. At a time when our community is coming under increasing attack, especially those who don't fit the gay-straight binary, it is absolutely vital we fight for everyone's rights to be - publicly - whoever they are. The party of individual liberty must surely be a party that not only guarantees the freedom to for people to love who they want, but to be honest and open about it too. As a bi person, I've never had anyone rudely cut me off mid-conversation when I'm talking about my wife on the basis that it's "not relevant". That certainly wasn't the case when I mentioned boyfriends.

LGBT+ Lib Dems have responded with a short statement in which they say: "we didn't know Layla was pansexual when we made her our Honorary President for 2020 - we just knew she was committed to supporting and defending our community. Now we know she's a part of it we couldn't be happier for her."

Obviously I wish Layla and Rosy all the best for the future. Thank you for your honesty, Layla - and for the way you opened up about your relationship!