I wish we could stop talking about Tim Farron... 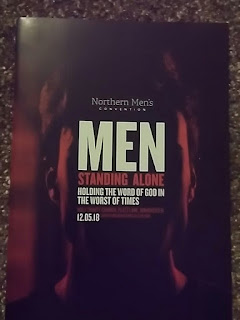 He can't help himself. Remember the party leader who told us he "doesn't pontificate on religious matters"? It was never true; as I pointed out many times, he actually has quite a record on making religious statements. But many did believe him, and told people like me we were illiberal and anti-Christian (yes, apparently even as a United Reformed Church elder you can be anti-Christian) for judging him according to his private views.

You see, that's the real problem - Tim isn't, and never has been, private. And that's why we have to talk.

Tim's latest intervention involves him addressing a Christian Men's Convention. That there is a need for a "men's convention" is questionable enough, but there are a number of Evangelical-Pentecostal churches who do this kind of thing. They're usually the kind of churches who see God's ordained role for men under threat from secular liberals, and feel the need to equip males to be "kings and princes" as the Divine Himself intended. I know, I've been to enough of them in the deep and darkest past.

Let's be honest - the kinds of churches who run events named Men Standing Alone are hardly likely to be particularly inclusive.

It's not the convention I object to as such. But, if you dig a little deeper - or simply turn over the flyer - you'll see what its expressed purpose is and that is more concerning.

Men Standing Alone is necessary (it argues) because of "assaults on orthodox Christian teaching, and morality, especially in the area of sexuality". Hmmm.

Then comes a more astonishing claim: "Those who have stood firm in the Anglican tradition at General Synod have been ridiculed and vilified. The leadership of those in authority in denominations who should be the guardians of Biblical truth have been muted to say the least." Where do you begin with this attack on fellow Christian believers? There is not a singular "tradition" in any denomination, let alone Anglican. Equating "Biblical truth" with an anti-LGBT stance is also both theologically illiterate and insulting towards progressive Christians. Make no mistake, these are simply fundamentalists for whom the promotion of heterosexuality as the God-created "norm" takes on super-significance.

Please note - this isn't the fine print. This is the real deal. This is what this convention is about - its main purpose. This is the opening paragraph on the back page of a "welcoming" flyer.

The persecution complex is clear for all to see, so perhaps it is little wonder that Tim Farron feels at home with them. But let's read on...

"Even in Bible teaching churches many appear to be wavering under the onslaught of the gay lobby." This assertion is so facile that further explanation hardly seems necessary. But it clears the picture up. What is this convention about? Empowering men to stand firm against the gay lobby, not to mention all those nasty churches who don't believe the Bible.  You couldn't make this stuff up.

So the main emphasis is on anti-equality. That's clear. But, sadly, there is more. Here are some Christians who aren't afraid to get political: "Add this scenario [i.e. "true believers" being persecuted by the gay lobby] to the increasing problems associated with immigration and Islam in particular...there is for many a feeling of despair." I jest you not. The leaflet could easily have been written by Nigel Farage. Christians are feeling marginalised...and why? It's all the fault of those nasty immigrants, especially the evil Muslims. There are no words to express the disgust I feel, as a Christian, for this horrifying and deeply illiberal perspective on immigration.

That some Christians hold such views is hardly surprising. What should I do as a liberal, and especially as a liberal Christian? Argue against it, surely. But I'd also be careful not to affirm such regressive, intolerant and to my mind deeply un-Christian views by doing something like, say, going to speak at their conferences.

Which brings me to this man - there are only two speakers and he is one of them: 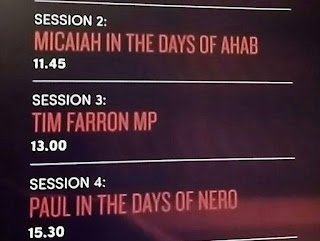 So, why on earth would Tim Farron want to be associated with this?

The only answer I can think of is that these are the people he feels comfortable around. He's not naïve. He knows perfectly well what they stand for. Having been to Tim's church in Kendal, I would suggest this isn't a million miles away from where they are theologically. I imagine he now doesn't care what his fellow Liberal Democrats think; in his mind anyone who criticises how he expresses his faith are taking aim at "Bible-believing" Christianity generally. His resignation speech confirmed this sense of persecution, and also a belief that his version of Christianity was somehow more true, more authentic and more radical than everyone else's. Yes, this is who Tim is.

Part of me doesn't want to talk about it, and would like to leave Tim to do as he feels God has called him. The problem, of course, is that he remains not only a Liberal Democrat MP but a frontbench spokesperson on Environment, Food and Rural Affairs. It is clearly inappropriate (to put it mildly) for a frontbench representative of any progressive party to attend this kind of event.

My concerns surrounding Tim have always related to how he expresses his faith, rather than the substance of that faith. Whatever he says on Saturday at Men Standing Alone, the fact that he is there at all affirms the kind of rhetoric on this flyer and that in itself is a problem.


Thanks to Mark Hewardine for bringing this to people's attention on twitter!

This afternoon, Tim Farron tweeted this:

Which confirms that either Tim is very, very, naïve - ridiculously naïve to the point that a former party leader doesn't actually check out the nature of an organisation and who is behind it before agreeing to speak at their conventions - or else he is lying.

In regards the organisation in question, it is obvious from the Northern Men's Conventions website that this is a group of fundamentalist conservative evangelicals. I imagine Tim would have been very much aware of this. I also believe he would have been aware of the content of previous conventions, in which star speakers included Rev David Robertson (of that famous bastion of Liberalism, the Free Church of Scotland).

If he has just been made aware today, then he is also naïve. The organisation's facebook page issued a statement about the convention, of which the flyer is almost a word-for-word copy with a few additional elements, in September 2017. It most definitely makes clear the convention aims to challenge the supposed assaults on "orthodox" teaching surrounding sexuality (a clear reference to LGBT issues): 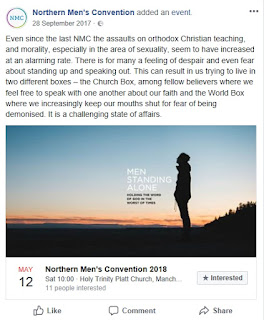 Is Tim really so naïve and inept that he can't undertake the most rudimentary of background checks?

I note the other speaker at the event is Rupert Bentley-Taylor. I know who he is - he's the nearest thing Evangelicals have to royalty - so I'd be surprised if Tim didn't. But we'll give Tim the benefit of the doubt. That said, why wouldn't Tim do basic checks and discover that Mr Bentley-Taylor is a director of the right-wing and deeply homophobic Christian Institute?

Is this really who he wants to be associated with? I know Tim to be a thorough and highly organised person. I for one cannot believe he is quite so careless. He should know better.

If an MP from any other party had behaved like this, we would rightly be pillorying them.