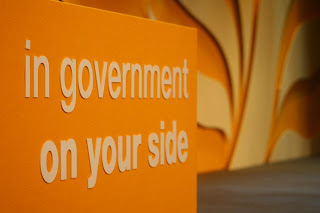 And so, that’s the end of conference for another year.

It was certainly interesting.

Prior to the start of conference, I was unsure how proceedings would pan out. Would conference see a stand-off between the rank-and-file and the leadership? Would discontent with the coalition, especially on tuition fees and the Health Bill, overshadow events? Would conference demand a change of direction from Nick Clegg, or would it embrace his determination to keep on keeping on?

Well, in spite of media speculation some things are now very clear. We may not like the Tories and we may not like every policy idea emanating from the coalition, but we’re in this for the long haul. There were no calls to abandon ship or to turn our back on the pluralistic approach to politics. This may well be due to the almost tangible feeling among party members that we’re actually becoming quite adept at influencing the government, especially with right-wing Tories lining up to convince the public of how effectively we’ve curbed their excesses. The mood among activists was far more positive than I would have imagined and, although tempered with a certain amount of realism, there was no call for any short-termist approaches to lift the party’s fortunes.

Certainly, Ed Miliband’s assumption that Liberal Democrat activists would warm towards Labour as relationships inevitably strained between the coalition partners has proved to be nothing other than wishful thinking. A survey of members by the Daily Politics found that almost as many Lib Dem members favoured working with our current partners rather than Labour in the event of another hung parliament (I refused to vote, as there was no option for the possibility of working with the Greens). Similarly, while many of us are concerned that the austerity programme is cutting too deeply and too quickly Lib Dems are not championing a plan B, realising that any such change in strategy would seriously undermine the markets and the wider economy. Basically, we might not like George Osborne, but we’re not thrilled with the performances of Ed Balls and his leader – or their lack of substantive policy ideas or economic strategy.

What was also apparent was the distinctiveness of Liberal Democrat policy. There is of course a distinction to be made between party policy and the policy of the coalition government. No-one could have sat through the debate on Education Credit, Social Care or Community Politics and seriously suggested we are a Tory-light party. Similarly, the motions passed in respect to drugs policy and nuclear power show a similarly distinctive and intellectually liberal policy direction that neither the Conservatives nor the Labour Party would have the courage to debate, let alone provide leadership on.

It was a good conference for Tim Farron, the party president. I’ve not always been impressed with his trademark mixture of populism and comedy routine. However, on this occasion he hit all the right notes. Charismatic and genuinely funny, Farron kept the conference entertained, but also took the opportunity to show some humility on the part of the leadership. Referring to Scotland, he said “Liberal Democrats who have served their communities and worked their backsides off for years, got their backsides kicked. I want to say this to you now, if you lost your seat, I stand with you; I am angry on your behalf; I take the responsibility and I absolutely will not insult you by claiming that this was collateral damage, or an understandable mid term blip. Frankly, as your President, I owe you an apology.” Excellent and honest – and the kind of thing I was hoping Nick Clegg would have said during his recent visits to Glasgow and Edinburgh.

Farron’s speech was seen by some in media circles as a bid for the leadership. It was of course nothing of the sort, but a direct appeal to party supporters to keep faith in Lib Dem ministers and the leader in particular. Praising the role of Lib Dems at the heart of government and in standing up to their Conservative opponents on issues that matter he said: “they are busy in their departments doing the right things. On those very, very rare occasions when Michael Gove says or does something stupid or wrong, Sarah Teather doesn’t come out and slag him off. Instead she fixes it...When the Tories showed hesitancy about committing to true and fair banking reforms, Vince Cable laid on the pressure and forced that commitment. And when George Osborne flew the kite of cutting income tax for the wealthy, Danny Alexander cut the string, and stopped him.”

He was also not afraid to criticise the Conservative Party or its more toxic policies, something that went down well with party loyalists. His belief that “we are a radical Liberal Party putting radical liberal politics into action and blocking Tory policies every day” reinforced his reputation as the party’s social conscience. That’s a matter of some debate, especially given Evan Harris’s interventions on a range of issues this week. But Tim’s certainly our foremost comedy talent.

Which is more than can be said of Sarah Teather. She made some puerile and misguided jokes at the expense of George Osborne and Peter Hain. It might have helped if they were funny, and her speech never really recovered. Other ministers fared better in their asides: Chris Huhne’s speech promoted a responsible energy programme and a radical compensation system aimed at clipping the wings of the energy companies but was more notable for his criticism of the Tories’ actions during the AV referendum campaign, while Vince Cable, again hitting all the right notes, spoke passionately on the need for political pluralism, the roots of the economic crisis and his view on the detail of a stimulus package for British business. He even had the courage to turn against “irresponsible capitalism” and gave his vision of a Social Democratic economic future in which he saw himself leading in the footsteps of Stafford Cripps and Roy Jenkins (I wasn’t able to see David Laws’ facial expressions at this point, but I use my imagination). It was terrific. Unfortunately, he was unable to resist describing key Tories as “descendants of those who sent children up chimneys”. It didn’t fit in too well with his championing of coalition but the party didn’t seem to mind.

There were some real achievements this week, most notably in the motions to end the ban on gay men donating blood, on ensuring our party has a genuinely liberal policy on reducing the harm stemming from drug misuse, on reiterating that the 50p tax rate is going nowhere and reigniting environmental issues, advocating a “green stimulus for economic recovery”. The party reasserted its philosophical liberalism, perhaps most notably in the debates that the media paid little attention to, such as those on Lords reform and the unnecessarily robust security measures used for accrediting delegates to conference.

Admittedly, the agenda could have been more adventurous and the more cynical of us might have considered the “feel good” motions to have been intentionally designed to avoid any major conflict with the leadership. The refusal to allow a full debate on the progress of the NHS Bill proved counter-productive and both Evan Harris and Shirley Williams were expressing their commitment to further concessions and amendments to the Bill at every given opportunity.

At the fringe meetings the growing influence of the Social Liberal Forum was indicative of the mood within the party. I am not entirely sure whether this is altogether positive, with a greater proportion of members than ever apparently identifying themselves with either the “social” or “economic” wings of liberal philosophy; further polarisation is in no-one’s interests. But the SLF clearly has a role to play in reinvigorating the party and seems to have an almost unique opportunity to do so with a strong appeal to members and activists.

The media predicted anger and frustration among delegates; there was, but generally this was largely confined to discussions on education and the NHS. The overall mood was broadly positive and my abiding memories will be of delegates from across the country providing encouragement and support to each other. I am convinced Nadine Dorries is partially responsible: what better antidote to the Liberal Democrats’ collective depression could there have been than loud and very public outbursts from far-right Tories attributing anything remotely progressive to our influence? There was certainly a belief that we are doing many of the right things in government and that these successes are all the sweeter for frustrating the Tories in the process.

The most crucial characteristic of Conference as a whole was the party’s resilience and determination to make the most of our opportunities in government. The next few years will not be easy, as Nick Clegg and Tim Farron are keen to remind us. But we are a party that for the most part believes in itself, has adopted a more mature and pragmatic approach to political achievement, has a positive attitude towards its role in government than any in the media could have imagined and – at least for the time being – is backing its leader.
Labels: Chris Huhne Evan Harris Liberal Democrats Nick Clegg party conferences Sarah Teather Shirley Williams Social Liberal Forum Tim Farron Vince Cable